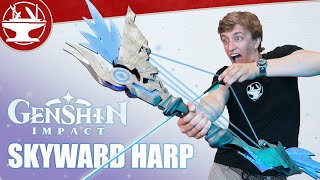 We’re building the Skyward Harp from Genshin Impact. Lets put this thing to the test! I’m a huge fan of open world action roleplaying games. Genshin Impact is one of my favourites. Needless to say I’m super excited for the release of Genshin Impact 1.

6. Midsummer Island Adventure I’m even more excited that they’ve asked us to do a custom build from the game. Genshin Impact takes place in a fantasy world. Fantasy presents us with a challenge. We can’t create magic.

We could do some fancy visual effects and CGI, but the Hacksmith Channel is about creating Real. Working. Prototypes. Luckily we came across the awesome Skyward Harp. I think it’s something we can do justice.

Although the arrows appear magical. We have a few ideas of how to tackle that. One thing Hacksmith Industries does have in common with the game is a cast of characters that posses different strengths.

So to get started on the design, I’m going to switch over to Ben. Okay yeah but, I have to go upstairs to do that. To design the Skyward Harp I took some reference images from in game and put them into Solidworks.

In their correct orientations. From there using sheet metal tools I designed the entire thing so it can be cut on our laser cutter and welded together. This is a really intricate design so I’m excited to see how it goes.

This is a lot of parts. It’s going to look really intricate. I’m not the best welder in the shop so I’m going to hand it off to Chris. Oh. That is a lot of welding. Ben is making me do a puzzle. I don’t do puzzles.

So we’ll see how this turns out. This is taking awhile. Lets switch over to Bogdan. Lets talk arrows. As Charles mentioned we can’t build magic. What we can build is an illusion that looks like magic.

Now the arrows in Genshin Impact, they’re pretty niffty. The tip of them sparkle and the entire arrow glows blue. So how are we going to do that? Well it’s actually pretty simple. For the sparkler we got a common household party sparklers.

That should be pretty good. For the glowing arrow shaft that’s a little more difficult. Luckily we have a simple solution. This is called retro-reflective tape, and it’s basically a tape with a bunch of small beads in it that make the tape super reflective.

When you shine light at it, it will actually glow as the same colour as the light. Which means all we have to do is cover the arrow shaft with this tape, have blue lighting in the room, and hopefully our entire arrow will glow like the arrows in Genshin Impact.

Alright kill the lights! Nice, it glows just like in Genshin. Now we just need it to sparkle. Genshin Impact Mid-Summer Island Adevnture features a new map with new islands to explore. Perfect for creating that summer vacation vibe.

Wardrobe plays a big part in Genshin and Mid-Summer Island Adventure is no exception. Klee will be returning and new character outfits for Jean and Barbara are available. During the version 1.6 event you can collect enough echoing konks you will receive Barbara’s outfit Summertime Sparkle for free.

New monsters and new events exclusive to version 1.6 round up to be an update you don’t want to miss. Use the link in the description below to get Genshin Impact on your devices right now. Here at Hacksmith Industries we also play with the elements.

Downstairs Chris is playing with fire. Up here I’m going to be talking about lightning, or at least lighting. To replicate the ethereal glow of the Skyward Harp. I’m going to be using fiber optics. Some edge lit acrylic panels and some really bright blue LEDs I’m going to cut the lights to size, strip some wires, solder them together, and we’ll be good to go.

This is actually going together not quite as nicely as I would’ve hoped but it is coming together. Now that the wiring is in order, I’m going to super glue the lights onto the fin. Okay we’ve got one glowing fin ready.

This is pretty straight forward, we’re just going to cut this to length. Put this guy on the end, and tighten it down. Then We are good to go. That does it for electronics. Lets switch back to Ben. Lets go make a grip.

I’m going to be printing it on our new LUZBOT Taz Pro with duel extruders so we can print soluble support. With the dual extruders we are able to print the handle in green, while also printing a soluble material seen in white at the same time.

The soluble material simply melts off when placed in water. While this finishes lets see how the welding is going. Welds done. Electronics are done. and grips are done. I guess that means it’s time for final assembly.

The welding has left some small surface imperfections on the bow. As well as cleaning up our welds, sandblasting is also going to give us the right texture. Okay this looks really good. I think I’m quite happy the result.

To be perfectly honest, I’ve never built something like this before so I don’t know where anything goes. Lets just give it a shot. I think I’m going to start with the acrylic pieces. Now you saw Charles make one of these.

In reality we actually have eight of them. We got a lot of work ahead. So far so good. Lets keep going. That should be a lot easier to work on. Now that all the acrylic is done it’s time to move onto the handle.

Green isn’t the right colour for this project. Lets go paint it silver. While the paint on the handle is drying I’m going to start on the fiber optic bow strings. Fiber optic strings are in, lets go do our second coat of paint.

Lets talk bow strings. What are we going to use in our bow? Let me show you what I came up with. Some normal dynmo rope on the end of regular everyday extension springs. In a normal recurve bow, the energy is stored in the flex of the limbs.

Since ours is made of 16 gage stainless steel and we can’t do that. We’re going to use pulleys, to redirect the force of springs, to emulate the flex. Lets add these to the bow. So in order to hold the pulley in the correct spot within the frame.

I need to use a lot of individual washers to get it spaced right. This could take awhile. Lets put pulley number two in. Now it’s time for us to install number three. It’s the fourth and final pulley.

Lets get it in. Now that the pulley and spring system are in all we need to do is plug in this battery. Lets put this thing to the test. First up, targets. Yes! Almost. Ahaa! It wouldn’t be a Hacksmith video if we didn’t kill some mannequins.

You know what we never shoot? Flowers. Lets make a tropical smoothie. We played with fire and lightning, now lets try water. Okay guys this project was a ton of fun! I think the end result looks great.

This has been an awesome collaborative effort with the whole team here. Make sure you like, comment and subscribe and thanks again to Genshin Impact for sponsoring this video. Thanks for watching and I’ll see you next week.